The public-private affiliation provides convenient health care to Veterans in their communities.

“This type of collaboration is the way of the future,” said VA Secretary Robert Wilkie. “Veterans need the expansion of choice, and this partnership is vital to affording them convenient access to VA health care services where they live.”

Walmart has donated equipment and space at five sites as part of a pilot initiative allowing Veterans to meet with a VA provider in a private room via video technology. VA telehealth clinical services vary by location and may include: primary care, nutrition, mental health and social work

This new option makes VA care easier to access and eases the burden of long travel times to appointments.

In the Veterans and Agent Orange update in 2016, the National Academy of Medicine (NAM) committee concluded there was compelling evidence for adding bladder cancer and hypothyroid conditions to the presumptive disease list. Further, the study clarified that Vietnam veterans with “Parkinson-like symptoms,” but without a formal diagnosis of Parkinson’s disease, should be considered under the presumption of Parkinson’s disease.  In the Veterans and Agent Orange: Update 11, released in November 2018, the NAM concluded that there is sufficient evidence of an association between Agent Orange and the development of hypertension.  The report elevated hypertension from suggestive evidence to sufficient evidence of a link.

The VA has not taken any action on adding these four diseases.  We are concerned by the recent release of internal documents that indicate Administration officials challenged the previous Secretary’s authority to add these four diseases and may have even impeded action.  Even more troubling is the possibility that the Administration is outweighing the cost of adding these diseases over those veterans in need of VA benefits and health care. Three of these pending presumptive diseases have been held up for more than three years, leaving affected veterans, family members and survivors waiting.

DAV led a coalition of 20 military and veterans service organizations to bring this issue to the forefront.  Earlier this month we called on Secretary Wilkie directly, to add these four diseases.  To date, we have not had any response from the VA.

Because the VA and the Administration are not taking action, we must turn to Congress.  H.R. 2200 will add bladder cancer, hypothyroidism, “Parkinson’s-like symptoms”, and hypertension to the presumptive disease list for Agent Orange exposure.  All four of these diseases have been scientifically associated with Agent Orange and are recommended for inclusion by the National Academy of Medicine.

DAV strongly supports H.R. 2200 as it is aligned with DAV Resolution No. 174, which calls for the addition of these presumptive diseases.  Please use the prepared letter or draft your own to urge your Representatives to support and cosponsor H.R. 2200.  Stand with us and support the addition of these diseases as presumptive to Agent Orange.  Thank you for your continued support of the DAV Commander’s Action Network.

Representative Joe Cunningham (SC) has introduced H.R. 2982, Women Veterans Health Care Accountability Act, to identify and remedy barriers women veterans face when trying to access VA health care.  The legislation would require the VA Secretary to survey women veterans-both those who use VA health care and those who do not-to understand their reasons for not using VA services.  The survey will question women veterans about their perceptions of safety in VA facilities, access to services, and stigmas they may express about seeking treatment for sensitive issues such as military sexual trauma, mental health or substance abuse disorders. The legislation would then require VA to identify strategies for addressing any issues identified by the survey.

According to VA, only 22% of women veterans compared with 28% of male veterans use VA health care.  VA has made many improvements in the way it manages the care of women using the system, and has launched campaigns to address veteran to veteran harassment, awareness about women veterans’ eligibility for VA benefits and services, and stigma for mental health seeking, yet these problems persist.  Findings from a detailed survey may assist the VA in developing tactics to tackle some of the ongoing concerns and barriers women veterans face when accessing VA health care.

Please contact your Representative in Congress to support H.R. 2982 using the prepared letter or compose your own.

Thank you for your support of the Commander’s Action Network.

If a veteran is not eligible for Department of Veterans Affairs (VA) health care based on service-connected disabilities, current statutes allow veterans treatment for diseases related to specific toxic exposures. However, exposure to burn pits is not one of the accepted toxic exposures.  H.R. 4137 would amend that statute to allow veterans who served at locations with an open air burn pit on or after January 1, 1990, to be eligible for VA medical care.

DAV strongly supports H.R. 4137, as it will provide veterans exposed to burn pits who have no other means of VA health care eligibility, with access to life-saving medical treatment. This legislation is in accord with DAV Resolution No. 049.

Please use the prepared electronic letter or draft your own to urge your Representative to support and cosponsor H.R. 4137.  As always, we appreciate your support for DAV and your grassroots activism in participating in DAV CAN.  Thank you for all you do for America’s veterans and their families.

As you are likely aware, during DAV’s 98th National Convention in Orlando, Florida, our membership approved a change to our National Bylaws which will now call for a flat rate of $300.00 for all new members, regardless of age, with membership remaining free for those 80 years of age or older. This change will go into effect January 1, 2020. Anyone who joins DAV before January 1, 2020, pays the current appropriate rate based on age. Applications received at National Headquarters, a National Service Office, or postmarked on or before December 31, 2019, will be accepted at the current rates. All applications will be updated to reflect this change, and old paper applications should be discarded after December 31, 2019. If you have any questions please contact the Membership Department at 888-236-8313 or membershippublic@dav.org.

“Under current bankruptcy law, a civilian disabled by a car wreck is treated better than a veteran disabled             because their convoy ran over an improvised explosive device,” Tester said. “For the folks who sacrificed life             and limb protecting our country, this disparity is unacceptable. Getting the HAVEN Act signed into law means  veterans’ disability payments will be rightfully excluded from burdensome bankruptcy calculations, ensuring vets      and their families retain the benefits they earned regardless of their financial circumstances.”

This legislation is also a part of Tester’s larger push to help combat service member and veteran mental health  issues, addiction, suicide, poverty, and homelessness – all of which are exacerbated by financial hardship. The HAVEN Act is supported by the Veterans of Foreign Wars, The American

As of Aug. 11, the U.S. Department of Veterans Affairs (VA) updated portions of the VA Schedule for Rating Disabilities(VASRD, or Rating Schedule) that evaluate infectious diseases, immune disorders and nutritional             deficiencies.  The collection of federal regulations used by the Veterans Benefits Administration helps claims processors evaluate the severity of disabilities and assign disability ratings.  “VA is in the process of updating all  15 body systems of the VASRD to more accurately reflect modern medicine and provide Veterans with clearer  rating decisions,” said VA Secretary Robert Wilkie. “By updating the rating schedule, Veterans receive decisions  based on the most current medical knowledge of their condition.”

Updating the rating schedule for conditions related to infectious diseases, immune disorders and nutritional deficiencies, enables VA claims processors to make more consistent decisions with greater ease and ensure Veterans understand these decisions. VA remains committed to improving its service to Veterans continuously and staying at the forefront of modern medicine as it has for decades

By awarding the contract, the VA can now lift the “gag” order which was awarded by the judicial system and             clinics and hospitals in region 4 can start to award contracts to physicians and speciality clinics.

The Community Care Network is the department’s direct link with community providers that will ensure VA             provides the right care at the right time to Veterans.

“This contract award reflects our ongoing commitment to increasing Veterans’ access to care,” said VA Secretary Robert Wilkie. “As part of VA’s modernization efforts, we designed the new network based on feedback from Veterans and other stakeholders, along with lessons learned from the Veterans Choice Program. We are confident that CCN will greatly improve customer service for Veterans and timeliness of payments to community providers.”

CCN will be the standard contract vehicle that allows VA to provide access to care for Veterans from community care providers using industry-standard approaches and guidelines. Until CCN is fully-implemented nationwide,  TriWest Healthcare Alliance will continue to support Veteran community care through its community provider network.

The U.S. Department of Veterans Affairs (VA) is preparing to process Agent Orange exposure claims for “Blue Water Navy” Veterans who served offshore of the Republic of Vietnam between Jan. 9, 1962, and May 7, 1975. These Veterans may be eligible for presumption of herbicide exposure through Public Law 116-23, Blue Water Navy Vietnam Veterans Act of 2019, which was signed into law June 25, 2019, and goes into effect Jan. 1, 2020.

The U.S. Department of Veterans Affairs (VA) recently revised its directives permitting religious literature, symbols and displays at VA facilities to protect religious liberty for Veterans and families while ensuring       inclusivity and nondiscrimination.

The move aims to simplify and clarify the department’s policies governing religious symbols, and spiritual and             pastoral care, which have been interpreted inconsistently at various VA facilities in recent years, resulting in unfortunate incidents that interrupted certain displays.

Effective July 3, these changes will help ensure that patrons within VA have access to religious literature and symbols at chapels as requested and protect representations of faith in publicly accessible displays at facilities    throughout the department.

“We want to make sure that all of our Veterans and their families feel welcome at VA, no matter their religious beliefs. Protecting religious liberty is a key part of how we accomplish that goal,” said VA Secretary Robert        Wilkie. “These important changes will bring simplicity and clarity to our policies governing religious and spiritual symbols, helping ensure we are consistently complying with the First Amendment to the             U.S.Constitution at thousands of facilities across the department.”

The new policies will:

Allow the inclusion in appropriate circumstances of religious content in publicly accessible displays at VA facilities.

Allow patients and their guests to request and be provided religious literature, symbols and sacred texts during visits to VA chapels and during their treatment at VA.

Allow VA to accept donations of religious literature, cards and symbols at its facilities and distribute them to VA patrons under appropriate circumstances or to a patron who requests them. 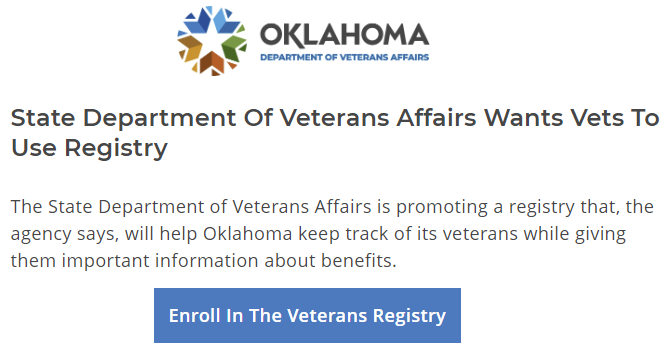